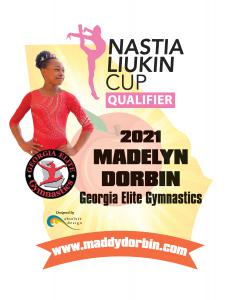 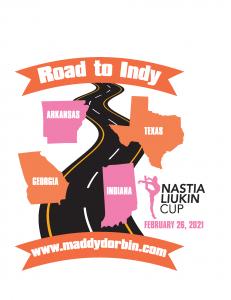 Madelyn Dorbin, the young and promising gymnast from Georgia, has secured a place in the 2021 Nastia Liukin Cup.

Coach Pete Arenas said, “Madelyn is a hardworking athlete. She is very focused and well deserves her place in this qualification series. We’re excited to see her perform at the next level.””
— Cornelya Dorbin

LILBURN, GEORGIA, UNITED STATES, January 25, 2021 /EINPresswire.com/ — Madelyn Dorbin, the young and promising gymnast from Georgia, has secured a place in the 2021 Nastia Liukin Cup. Madelyn had a dream run at the recently held Atlanta Crown Invitational in Duluth, GA, where she mesmerized the judges and the audience with her skills and finished first in the all-around with a 38.30.
Madelyn is one of the 18 junior qualifiers who will be competing at the 12th edition of the Nastia Liukin Cup and only the third gymnast from Georgia to qualify in the Cup’s 12-year history. The Nastia Liukin Cup will be held on February 26th at Indiana Convention Center, Indianapolis, IND. As a 2nd year, Level 10 athlete in the Women’s Artistic Program for USA Gymnastics, Madelyn trains 30 hours per week at Georgia Elite Gymnastics in Watkinsville, GA. She makes a 100-mile round-trip commute of two hours a day, 6 days a week so that she can train. Madelyn is home-schooled and does her class work in between and after practices. Her daily commute and time in the gym is like having a full-time job; so getting her schoolwork in is a priority.

Coach/Owner Pete Arenas said, “Madelyn is a dedicated and hardworking athlete. She is very focused and well deserves her place in this qualification series. She is very consistent, and we’re excited to see her perform at the next level.”

Begun in 2010, The Nastia Liukin Cup is the creation of the 2008 Olympic champion and 14-times Olympic and World medalist, Nastia Liukin. The series will be telecast live on Friday, February 26, 2:30 p.m. ET on NBCSN. The competition this year will be fierce with the participation of 18 junior and 18 senior athletes each at Level 10 from the USA Gymnastics Women’s Development Program.

Madelyn Dorbin (“Maddy”) was born in Little Rock, AR in 2006 and her hometown is Lilburn, GA. Madelyn’s parents (Cornelya and David), inspired by her acrobatic feats of jumping off furniture at home and at the tender age of two, signed her up for a session at Gymboree. Impressed by her strength and agility, the instructor recommended gymnastics classes. At the age of 8, Madelyn began her competitive career as an Excel Silver gymnast in 2015 at Georgia Gymnastics Academy.

She joined Georgia Elite Gymnastics (GEG) in the summer of 2017. Since joining GEG, Madelyn scored out of levels 4, 5, 7 and 9. During 2020 as a 1st year Level 10, Madelyn placed 3rd on beam but injured her ankle on floor performing a double layout. She made an impressive comeback at the Excalibur Cup in Virginia Beach by placing 1st all-around at this meet. Although the season was cut short by the pandemic, Madelyn remained active and trained at home to maintain her stamina and endurance.

Madelyn’s favorite gymnastics event is floor. Her goal is to compete in more national level events in the future and receive an athletic scholarship for gymnastics. At school, her favorite subject is history, and her hobbies include gardening and crafting. Outside the gym, Madelyn enjoys spending time with her family and her dog Brewster.