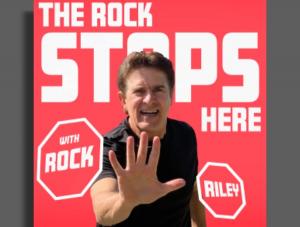 The Rock Stops Here is brought to you by Radio Influence.

Publisher of The Free Press, Brian Burns said, "We are thrilled to have Rock Riley's energy as part of The Free Press Sport's section. His understanding of all things sports and the all-star list of his interviews are fun and informative."

In college, Jersey-born Rock Riley majored in communications but says he never set foot in a radio or TV studio while in school. His first on-air job, covering high school football for a local cable company, settled any doubts he may have had about what kind of career he wanted. It was definitely going to be sports broadcasting. He’s attended William Paterson University in Wayne, NJ, and then St. Leo College after relocating to Florida.

In 1997, he became the weekend TV host of “The Sports Connection” on Bright House cable’s Bay News 9 and was later promoted to weekday anchor two years later. His Tampa Bay radio stints include work on WFLA, WDAE, and 98.7 The Fan WHFS.

Rock has been a national sports reporter covering Major League Baseball’s Colorado Rockies and the All-Star Game, the NBA finals, and numerous Super Bowls. One, in particular, stands out – Super Bowl XXXVII, the Tampa Bay Bucs’ win in 2003.

Riley exited the cable network in December 2016 and returned to radio July 3, 2017, as the afternoon drive host for sports/talk WHBO AM-1040 The Team.